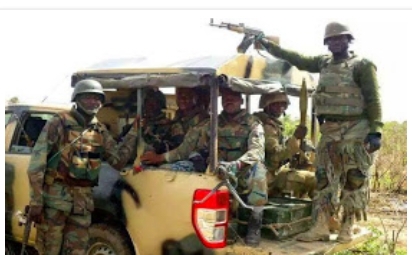 203 Nigerian soldiers have allegedly been dismissed by the Nigerian military over allegations of disobeying a direct order from their commanding officer to engage Boko Haram members and demanding for support equipment. The soldiers and their families are said to have been evicted from the barracks after a court martial that sat on December 24th night found them guilty of disobeying superior authority.

Premium Times reports that one of the dismissed soldier attached to the 7th division in Maiduguri Borno state, who spoke on the condition of anonymity said  that after the sect members dislodged their unit in Damboa, Borno state sometime last year,  they (the soldiers) were reconvened in Maiduguri in August to further engage in the fight against boko haram and upon their arrival, they were they were given two weeks pass and that at the expiration of their pass, they were issued new uniforms, boots and handed 30 rounds of bullets each as against the 60 rounds meant to be given to them. He said their commanding chief ordered that they move in a tipper to continue the fight to dislodge the sect members in Damboa but that some of the soldiers argued that serious weapons would be needed in the fierce battle they are expected to embark on as they have being fighting with the sect members and known the type of weapons they use.
“So we asked for support weapons. No support weapon was provided. Our CO (Commanding Officer) said he would discuss with the GOC (General Officer Commanding) of the 7 Division at the headquarters. When he came back, he said we should stand down. We thought all was well,” our source said.
He said the next day their new CO, Mohammed A, a lieutenant colonel from 195 battalion, Agenebode, ordered them to submit their weapons and uniforms or be charged with mutiny.
“On the morning of 16 of August, after the GOC briefing, our commander started calling our names and he said anyone whose name is called should submit their uniform and weapon. He added that anyone who failed to do that would be charged for mutiny. We were surprised at what was happening. He started from the most senior soldier among us, a warrant officer who had served for almost 30 years. They asked us to go back to the barrack. It is a war zone and our weapons had been taken from us. Staying around was of no use so we left Maiduguri back home.”
The next order from the army hierarchy was for the soldiers to report to the 4th Brigade headquarters in Benin where they were detained for three months.
“They kept us in the fenced field at the officers’ mess in 4th battalion headquarters. When we first arrived at Benin they took statements from us and took it to Maiduguri. The original charge against us was for deserting but after our statements were taken they changed the charge to disobedient to particular order. They said we disobeyed the CO’s order. They seized our phones, we couldn’t communicate with our families for the 90 days we were kept in detention,” our source said.
After they were released on December 24, they were conveyed to their various units. The soldier said on getting to their units, a court martial was set up at about 11.30 p.m. where they were tried and dismissed. He said the next morning, they were evicted from the barrack with their families.
“It was dismissal without benefits. After 17 years in service. Even people that served for 30 years were dismissed without benefits. We had no legal representation.” the source said
The Nigerian military has not reacted to the report.