Home Metro News We Have Been Able To Maintain A Stable Economy Despite Turbulent Times...
Facebook
Twitter
WhatsApp 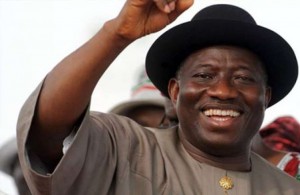 President Goodluck Jonathan says his administration has been able to ensure the development of the country in the past four years, despite the trying circumstances Nigeria has found itself in recent times.

“By the special Grace of God, the Federal Government, under my leadership, has continued, in the past four years to lead our country forward, even under the most trying circumstances. The progress we have made in priority areas bears us testimony,” he said in a New Year message yesterday.

“Our national economy maintained a steady growth rate of close to seven per cent in the past four years and millions of fresh employment opportunities were created for our people as a direct consequence.

“Being very conscious of the inherent perils of our over-reliance on income from crude oil exports for national development, we have focused on accelerating the diversification of our economy.

“The non-oil sector, which has grown by an average of 8 per cent in the last few years, is now a major driver of growth in our economy,” the president said.

He noted that the 2015 national budget, which has already been presented before the National Assembly, is targeted at deepening the country’s efforts at becoming an economy not dependent on oil.

“The budget also includes measures to ensure that the downturn in the price of oil does not affect our development plans and our national economy too, adversely. We are adjusting our financial processes to safeguard our economy.  We are also taking steps to ensure that the poor and the low and medium income earners do not bear the brunt.
Stability of Naira in 2015.

“In 2015, this administration will continue to lay the foundation for a vibrant economy that attracts significant Foreign Direct Investment and promotes policies that ensure economic stability.

“We will ensure stability in the value of the Naira by striving to take away speculative behaviours that cause market exchange pressures,” Jonathan said.

According to him, the government should continue to build and maintain a healthy external reserves position and strengthen fiscal buffers.  We will ensure the Naira remains strong, and gives foreign investors the clarity and certainty that they need, to guide future investment decisions.

“We will continue to improve our payment systems and strengthen risk-based supervision mechanism for Nigerian banks to ensure overall health and stability of the banking system,” Jonathan said.