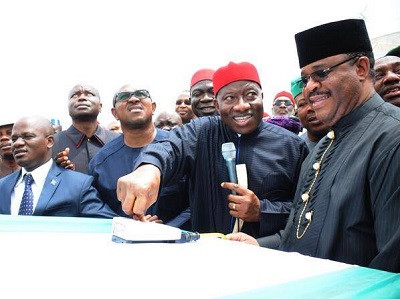 President Goodluck Jonathan said the Federal Government has spent N10 billion on construction of the 2nd Niger Bridge out of the N130 billion total cost of the project.

The President disclosed this when he stopover at the project’s site in Asaba on Saturday on his way to PDP campaign in Onitsha, Anambra.

Jonathan said it was a big project being executed under a Public Private Partnership (PPP) arrangement.

He said that now that it had taken off, its execution would go on smoothly and uninterrupted through to 48 months completion period.

“So far, out of the N130 million total cost of the project, we have spent about N10 billion.

“It is a big project and now that it has taking off, it will go on smoothly through the 48 months completion time.

“The project is a PPP arrangement, I am quite impressed with what I have seen”, he said.

He added that most components required for the construction had been procured and piling work had commenced.

Mr Mike Onolomemen, Minister of Works said a lot had been done since the flag off of the project in March 2014.

Onolememen said the contracting firm, Julius Berger Nigeria, was engaged because of its antecedents, adding that almost all the procurements for the construction of the bridge were imported.

According to him, works are in progress with the piles being driven into the ground and dredging going on along the River Niger.

“For us, it is a thing of joy and certainly before the next raining season, a lot of piles would have been driven in. No doubt, development of infrastructure takes a long time”.

Lubasch said the project would be of enormous social and economic benefits and significance to the country.

The News Agency of Nigeria (NAN) reports that the President was accompanied to the project site by former Gov. Peter Obi of Anambra, among other dignitaries.