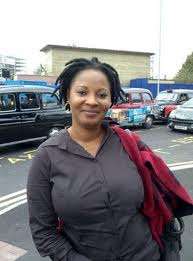 This is a topic that Stella Damasus has been fighting on for a while and it seems like few women are willing to discuss the issue.

In a recent interview with Vanguard on January 3, 2015, Yoruba actress Moji Olaiya revealed why she ran out of her previous marriage for safety reasons.

She said the reason why she dumped her husband Bayo Okesola was because he kept assaulting her physically.

During the interview, Moji revealed that she doesn’t want to be a victim of domestic violence and also she wants to protect her daughter’s future.

Moji said she has every intention of re-marrying and she’s currently dating a new man but cannot reveal his identity because she’s yet to legally divorce her ex husband Bayo who she married in 2007.