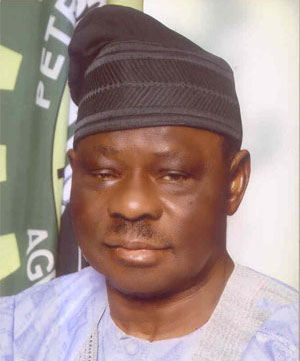 The Director General of the Peoples Democratic Party, PDP, Presidential Campaign Organisation, Dr. Ahmadu Ali, has described the presidential candidate of the All Progressives Congress, APC, Gen. Muhammadu Buhari (retd.), “as a septuagenarian with fossilised ideas of how to run a government and social engineering”.

Ali made the remark at the inauguration of the party’s Presidential Campaign Council, in Maitama District, Abuja, on Tuesday.

The former national chairman of the PDP, spoke almost a fortnight after the National Secretary of the party, Prof. Wale Oladipo, described the APC presidential flag bearer as “a semi-illiterate jackboot”.

This is not the first time that Ali, who will clock 79 on March 1, will be launching a verbal attack against the former head of state. At the launch of a book on President Goodluck Jonathan’s achievement in Abuja last month, he had also likened Buhari, who last December 17, turned 72, to “an old plane that has been parked for long” whose functionality cannot be guaranteed.

Mr. Ali, who will turn 79 on March 1, is a retired army colonel, though trained as a physician.

At Tuesday’s event, the retired army colonel of the famed ‘Ali-Must-Go’ students’ protests in the late 1970’s, argued that at a time nations were shopping for younger elements to rule them, the APC was ironically throwing up a septuagenarian as its presidential flag bearer.

“In this 21st century where great nations of this world are fielding young men and women in their forties and fifties as presidents and prime ministers, it is ironic that Nigeria’s APC is fielding a septuagenarian with fossilised ideas of how to run a government and social engineering. Nigeria deserves a better leadership than their candidate who has no certificates to tender as requirement for entering an election”, Mr. Ali said.

The former PDP chairman, who described the ruling party as the defending champion in the February 14 presidential contest, said the party would go into the elections with the belt tightly wound around its waist.

He stated that the party was proud of President Jonathan because he is a dynamic and vibrant leader, who is determined to move the nation forward.

He said the party would not be as desperate as the opposition, “which is already in a fix on how to face President Jonathan’s enviable records in good governance”.

He said the ruling party could not be intimidated by the opposition, since Nigeria would transform from “Goodluck and Goodluck” while it (opposition) would hold on to “bad luck”.

Dismissing the APC, Mr. Ali, who trained as a medical doctor, described the leading opposition party as a creation of the social media.

He pointed out that the opposition was only vibrant on social media platform but absent on the ground, vowing that it would be defeated I next month’s elections.

The presidential campaign director noted that going by the available facts on ground, the PDP does not only remain the preferred party to Nigerians; Mr. Jonathan also remained the preferred candidate.