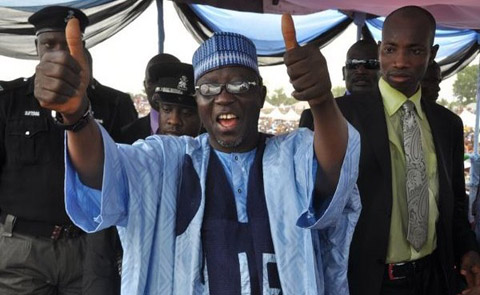 Governor Tanko Al-Makura of Nasarawa State says he has forgiven all those who wished him dead following rumours that widely circulated in the state to the effect that he had died while receiving medical treatment for a kidney-related ailment abroad.

Al-Makura, who arrived Lafia, the state capital at about 4pm to a rousing welcome, drove through township streets as jubilant crowds lined the streets in solidarity.

Addressing the crowd of supporters that turned out to welcome him at the Government House, Lafia, Al-Makura, who was emotional on sighting the number of people that turned out in solidarity said “this has further confirmed to me that my mandate is from the people of Nasarawa State”.

The governor stated further that the show of love and support demonstrated by the citizens of the state has spurred him to be more committed to the cause of good governance for the development of the state.

Al-Makura lamented that those who could not achieve their fiendish mission through democratic or peaceful means, have now resorted to spreading such wicked rumours, adding “To all those who went round wishing me dead, I leave them entirely to what God wills for them”.