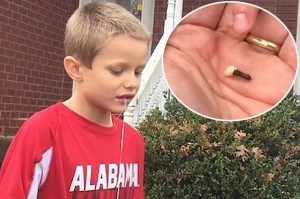 An American dad made his 7-year-old son and himself  into viral stars with a video chronicling a baby tooth extraction using dental floss, a golf club and a golf ball. UPI has more:

Phil Smith said his son, Noah, complained of pain when they attempted to simply pull the loose tooth out of his mouth, so he devised a system using a piece of floss to connect the tooth to a golf ball he then struck with a club.

“My 7-year-old wanted to pull his tooth but was concerned it would be too painful to pull SLOWLY,” Smith wrote in the description of the video posted to YouTube. “So we did it QUICKLY and in his words with no pain, just a little fear.”

The video, which appears to have been shot somewhere in the United States, has gone viral on YouTube, with commenters’ opinions ranging from calling the stunt “child abuse” to “teeth pulling done right.”