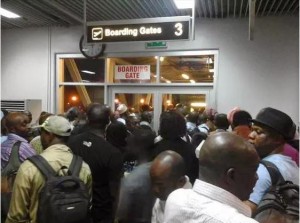 Truth is, I have been an unfortunate victim of this one time too many. You book a flight for 8am in the morning and the flight gets postponed several times, you end up travelling 8pm at night.

A large group of stranded passengers, who were scheduled to travel to Ibadan by Arik Air but were left stranded for hours by the airline yesterday shut down operations at the Nnamdi Azikiwe International Airport, Abuja.

The aggrieved passengers blocked the boarding gate of the airport and did not allow Arik and other airlines to board passengers to other destinations.

One of the stranded passengers, Saka Waheed, a civil society activist, told PREMIUM TIMES at about 9:30 P.M that the aborted flight was originally scheduled for 3.25pm.

“Later, they came to tell us it had been changed to 4p.m. By 4 o’clock, they said flight
would be 7pm. When it was 7, we were directed to enter a bus to take us to the tarmac so that we could board the plane and leave for Ibadan.

Although we entered the bus, yet the driver later told us to get down. In short, that was the point we were told the flight had been cancelled, after we had spent over four hours at the airport,” Mr. Waheed said.

He said they could not also assess their luggage, which had already been checked in. He complained that neither airport officials nor Arik Air staff offered them any explanation on why the flight was cancelled and how to get their luggage.

“Because of that treatment, we are not allowing anybody to travel out of Abuja until either airport officials or Arik officials come to address us,” Mr. Waheed said.

“Well, as you can see; these people are very barbaric. They are treating us like animals. Nobody has come to explain what happened. They have left us stranded.”

Both Messrs Waheed and Oladele said there was no official at the Arik stand to attend to passengers’ complaints as at the time this story was filed yesterday. Officials of the Federal Airport Authority of Nigeria [FAAN] as well as Arik Air’s spokesperson could not be reached either.

Passengers said Arik is notorious for arbitrary flight postponement and cancellation and that they are disappointed that aviation authorities have so far failed to call the airline to order.