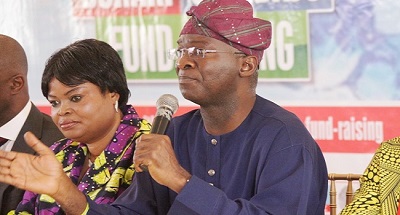 The All Progressives Congress, APC, said it has instructed its lawyers to institute a court case against the National National Communications Commission, NCC, for shutting down some of the party’s platforms of fundraising.

The Lagos State Governor, Babatunde Fashola, made the disclosure on Sunday at the meeting of the Fundraising Directorate of the APC Presidential Council, in Abuja.

Shortly after the Buhari-Osinbajo Presidential Campaign Fundraising Committee, headed by Mr. Fashola, launched some of its platforms for raising funds, the NCC, last week, shut down the Short Messaging Service (SMS) platform – 35350 – meant to encourage grassroots donors, especially young people, to do so at the cost of N100 per SMS.

Fashola, who is a Senior Advocate of Nigeria (SAN), argued that the commission’s action was a breach of constitutional provisions and tantamount to double standards, concluding that the party was left with no other choice but to seek legal redress of the action.

According to him, the directive to shut the platform was contained in a letter dated January 19, with reference number NCC/CAB/GEN/2015/VOL.1/004, which was signed by officials of the NCC.

The officials, who signed the directive, according to Fashola, included the Director of Consumer Affairs, Maryam Bayi and the Head of Legal and Regulatory Services, Yinka Akinloye, on behalf of the NCC Executive Vice Chairman, Eugene Juwah.

Accusing NCC of double standards, the governor recalled that in 2010, approval was given to the Jonathan/Sambo campaign organisation to raise funds using such a platform but that the APC was being denied the same right in 2015.

He said: “We have advised our lawyers to go to court, they are preparing the papers now. In 2010, approval was given to the Jonathan/Sambo campaign to raise fund (using such a platform). The rule seems to have changed in 2015”.

In spite of the development, Fashola explained to the gathering that the fundraising platform, which included the sale of scratch cards and donations into a designated First Bank account, are still active.

The APC fundraising committee chairman noted that even though the platform was established when the APC presidential candidate, Muhammadu Buhari, was still seeking the party’s ticket, “it is still up and running and supporters can still donate”.