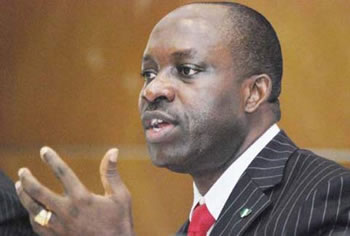 The All Progressives Congress (APC) has dismissed the insinuation of a former governor of Central Bank of Nigeria (CBN), Professor Chukwuma Soludo, that the party was clamouring for change because it was desperate for power.

Director of Policy, Research and Strategy of the APC Presidential Campaign, Dr Kayode Fayemi, who spoke on behalf of the party, noted that the party was on a rescue mission and was “determined to lead Nigeria in the direction of change that is so urgently required”.

The former governor, however, commended Soludo for his insightful article. He said: “we agree with Professor Soludo that if the political parties, including ours, must justify the overwhelming enthusiasm of Nigerians about the 2015 elections, we must remain focused on the issues that matter most to them, which is the progress of our country and the well-being of our people.”

According to him, this has been the driving conviction of the APC all along. “Even as we prepare for the immediate rescue mission in 2015, our minds are also set on building the necessary democratic institutions that would entrench our ideological conviction as a progressive and people-centred party.”

The party plans to establish a National Progressives Policy Institute in the near future, said Fayemi. But the party remains very clear about the enormity of the task ahead. “We would not seek to underplay it. We are supremely confident that we are equal to the task and we appreciate the commitment of majority of Nigerians to this quest for change.”

“The APC presents a real option to Nigerians. Professor Soludo expressed the sentiments of most Nigerians, when he spoke about the incalculable damage that the PDP under President Jonathan had done to the Nigerian economy and the unprecedented hardship that his six years of the locust had brought upon Nigerians.”

He clarified, however, that “the APC does not intend to ride into power on a mere rhetoric of ‘change’,” saying “the change we propose is fundamental in many ways, as it is critical to the very survival of our country.”

“APC does not promise Eldorado. Neither our candidate nor our manifesto has made such promise. Our programmes are based on the critical awareness of the difficult task ahead, while holding out a ray of hope to our people. The promises that we make reflect our innermost belief that the people must be at the centre of development.”

Fayemi also boasted about his party’s ability to achieve its objectives, citing successes recorded in states under APC leadership. “Going by the government’s own statistics, is it mere coincidence that the three states with the lowest unemployment rate – Osun, Lagos and Kwara – are all APC states? This is evidence of our party’s ability to tackle this problem head-on.

“APC’s policy thrust will create an enabling environment and incentives for the formal and informal sectors to lead the quest for job creation. This will be done in addition to skills acquisition and enterprise- training to ensure our youths are equipped with the appropriate skills to take these jobs.

“Merely introducing a national qualification standards would power a whole new world of opportunities for our artisans by launching them into the international job markets. We note the issue that Professor Soludo picked with our figure of 720,000 jobs. We need to clarify that this is limited to immediate direct.”