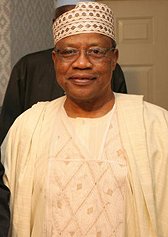 Babangida had warmly received President Goodluck Jonathan and the presidential candidate of the All Progressives Congress (APC), Major-General Muhammadu Buhari (rtd), in a move that suggests the endorsement of both.

Babangida, however, stated during a talk show on Channels TV, that all the candidates had displayed passion for the unity of the country and as such, deserve his support.

He also did not deny throwing his weight behind Jonathan, when asked by the presenter of the programme, Ms. Kadaria Ahmed.

“I did allude to that. I said I found him as someone who has a very strong belief about the unity of this country.

“Those of us who fought the civil war and I still carry a bullet here as a permanent reminder in me, so anyone who talks about Nigeria’s unity, I get impassioned about it.

The former president said as far as the presidential election was concerned, all the 14 presidential candidates had his blessing.

“The only difference and I did mention it, is that I have not been able to read what they have to offer to this country and I am going to do that. Whoever offers what I was looking forward to I will cast my vote,” he said.

He called on Nigerians, especially Muslims, to stand up and fight against Boko Haram, saying that the group had carried out acts that are contrary to the tenets of Islam.

“Nigerians have to mobilise against the Boko Haram and that will make it easy to win the war,” he said.

Babangida said he had no regrets over anything he did during his regime, but admitted that if there was anything he would have done differently, it would have been to include a provision for a two-party system in the Nigerian constitution.