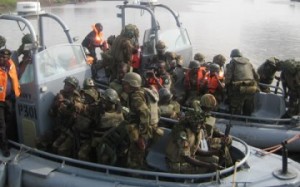 Boat owners and drivers in Bayelsa State have unveiled a security partnership with the Joint Task Force (JTF) code named Operation Pulo Shield in a bid to step up maritime security in the area.

The trio set up a special task force to identify and assist security agents to arrest suspected pirates and illegal bunkerers in the state. They said the partnership would further boost intelligence gathering, engagement of unemployed youths by the task force and campaign against illegal arms dealing, among other criminal acts.

According to the Chairman of the Maritime Workers Union, Lloyd Sese, the partnership with JTF and the setting up of the maritime task force would commence in the next couple of weeks.

He therefore called on youths involved in illegal activities across the country’s waterways to drop their arms and embrace the Special Task Force programme.

“The programme will give youths the opportunity to help security operatives in the state to curb the activities of pirate and crude oil theft that is crippling the economy of the state,” Sense said.

“I call on the youths involved in piracy to drop their arms and work with security agents in the state to ensure safe maritime transportation.

“In this age, the society is free for everybody that wishes the good things of life.

“Therefore, I call on the youths to drop their arms and leave the creeks and do something meaningful with their lives.

“We intend to set up a special maritime task force to help security agents combat pirate’s activities and many of our youths will, through this programme, be gainfully employed.

“I want them to abandon piracy and embrace the various skill acquisition programmes the government intends to provide,” he added.