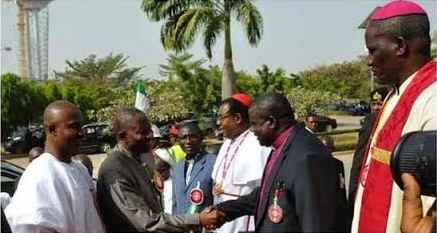 President Goodluck Jonathan has urged Nigerians to continue to pray for the nation and the Armed Forces in their effort to defend the territorial integrity of the country.

He made the call while speaking at the 2015 Armed Forces Remembrance Day Church Service at the National Christian Centre, Abuja on Sunday. The theme of this year’s celebration is “Appreciating the Nigerian Armed Forces”.

According to Jonathan, the situation would have been worse, if not for the dedication of the security personnel and the prayers of Nigerians.

He said: “Looking at what is happening all over the world today, even some sophisticated countries that have the technology and can see anywhere from their bedroom still have terror challenges not to talk of Nigeria that is not yet there.

“Even in our country, it would have been worse than this but for your prayers. We crave your indulgence to continue to pray for us. Do not stop in your prayers”.

Confirming the presence of fifth columnists in the military, the president said that government will continue to kit and equip them to effectively live up to their constitutional responsibilities.

He said: “Let me also appreciate the armed forces. Whenever you hear that people have been killed, there is this temptation to say they are not doing anything. Yes, we know there are some black legs within the armed forces, no doubt about that. Some have been caught, some are being prosecuted.

“But on the overall, Nigerian armed forces are gallant people. They have been working hard day and night, with the police and other organisations like SSS and NIA. That is why we are even sleeping. On occasions like this, we must commend them, appreciate them and really encourage them.

“I know that if they have not been working the way they are working, it could have been worse for us. As a government, we know that yes there inadequacies in the military but be rest assured that we are trying within this period to properly kit and equip you to protect our citizens.

“Let me call on all Nigerians to continue to pray for the Armed Forces, their families, their wives and children because it is not easy to be the wife of a soldier and the husband is posted to Borno state”.

The government, he said, will continue to invest in the welfare of military personnel and their families through programmes like the recently launched Victim Support Fund.

In his sermon, the Prelate, Methodist Church of Nigeria, Archbishop Samuel Uche, called on the Federal Government to jail some group of Nigerians threatening to form parallel government in 2015 as their actions amount to treason.

He lamented the situation where high profile citizens have resorted to making unguarded utterances for cheap political gains rather than partner with government to tackle the current insecurity faced by the country.

“Some shameless individuals and groups make such utterances and use grievous situation as a tool for politicking, blaming the government in power as doing nothing to solve the problem of insurgency. Who is deceiving who?”

He also said that available information before him shows that 95 percent of persons fighting Nigeria in the guise of Boko Haram were of Fulani and Kanuri origin.

“Let me reveal to you this evening and at this important service at this juncture that some of our soldiers, because you know we Bishops have impact in the society, we relate with soldiers and all manner of people. And some of the people in warfront have confided in us that apart from some mercenaries from Chad, Libya as well as Somalia, 95 percent of those fighting our country are of Fulani and Kanuri origin.

“They’re aggrieved because they want power at all costs. They believe Nigeria belongs to them alone and that they’re born to rule while others follow. It is deceit.

“The second is that they want to Islamise Nigeria and build a parallel caliphate different from the one we know in Sokoto”, he said.