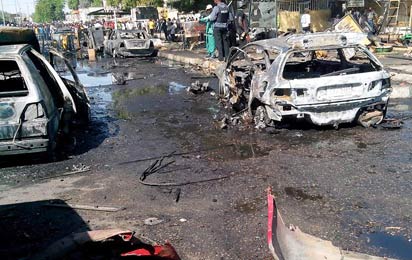 A suspected female suicide bomber has blown herself up at the popular Maiduguri poultry market, with several people feared dead, PREMIUM TIMES is reporting.

Although details of the explosion are sketchy and casualty figure unknown at this time, the incident has sparked panic across the Borno State capital with residents scampering home for safety.

The attack, which occurred some few minutes after noon today, is reportedly coming on the heels of a similar attack at the same market over one month ago.

The spokesperson of the Borno Police, Gideon Jibrin, confirmed the explosion.

Jibrin, however, said policemen were heading to the scene of the attack to ascertain the true situation of things.

A security source, who spoke on the condition of anonymity because he was not authorised to speak on the matter, said the explosive was worn as a vest by a girl he believed not to be older than 10.

“Her body was completely shattered”, the source said. “Because of the high calibre explosive she strapped to her body, the upper part of her body was flung apart and found about 500 metres away”.