BREAKING NEWS: We’re Not In Possession Of Buhari’s Credentials – Army 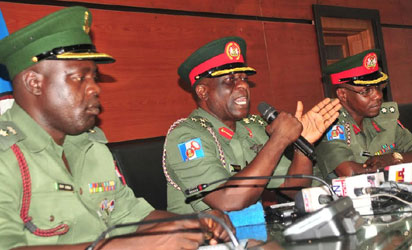 The controversy surrounding the secondary school certificate of the presidential candidate of the All Progressives Congress, APC, General Muhammadu Buhari (retd.) has assumed a new dimension with the Nigerian Army declaring that it is not in possession of Mr. Buhari’s credentials – original or photocopy.
http://www.newbalanceshoesinc.com new balance 574 mens
The APC presidential candidate explained in an affidavit submitted to the Independent National Electoral Commission that all his academic credentials were with the Military Board.

However, speculations began to fly around that perhaps Mr. Buhari, who is contesting the presidential election for a record fourth time, did not have the requisite secondary school educational qualification, which is the minimum requirement stipulated by the Nigerian constitution, to run for the office of president.

The Nigerian Army, at a press conference in Abuja on Tuesday, said that it only had a letter from the Principal of Buhari’s secondary school, dated 1961, recommending him for enlistment into the military school.