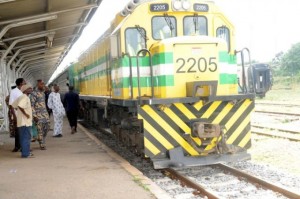 Presidential candidate of the All Progressives Congress (APC), General Muhammadu Buhari, yesterday, faulted claims by the Federal Government of revamping the Nigerian Railways, saying nothing was on ground as proof.

Buhari said this when he paid a courtesy visit to Oba of Lagos, Rilwanu Akiolu, in his palace at Lagos Island of the state, as his campaign train moved to Lagos.

“A lot of noise is being made about Nigerian Railways, but there is nothing on ground. Kabiyesi, these are some of the problems—insecurity, economic imbalance and corruption identified by the APC.

“These problems have virtually denied Nigeria the opportunity to improve other social services like education and healthcare.

“Infrastructure is another structure that helps to bring industries back that will create employment. And if elected, we will complete the Lagos-Ibadan Expressway to Ilorin.

“The monies we realised from anti-corruption campaign will be adequately used to improve education in the country. One of the legacies we can leave for this generation is good education, if that is done most people will look after themselves.”

In his reaction to concerns raised by residents of Lagos, Buhari lamented that “all the responsibilities that should have been catered for by the Federal Government have been left to the state government.

“The state was left with enormous decayed infrastructure which should have been for their own interest. Lagos state has been keeping and maintaining them, but the Federal Government has not been sympathetic enough to take the responsibility of what they left behind.

“We assure you that the APC will study this situation and make as much compensation as possible to Lagos State,” the APC presidential candidate promised.