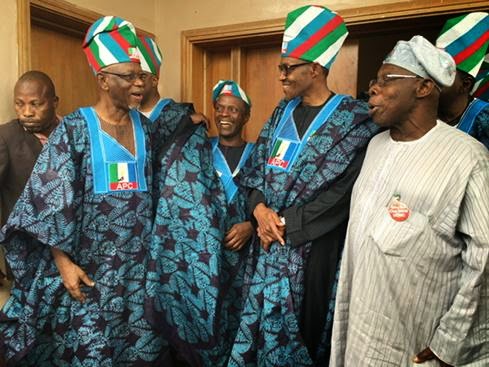 Former President Olusegun Obasanjo, Tuesday, said the presidential candidate of the All Progressives Congress (APC) Muhammadu Buhari did not embezzle money as the head of the Petroleum Trust Fund (PTF), as the report of the probe panel he set up while he was president did not find Buhari guilty of corruption.

The former president, however said, one thing the panel found was the inconsistency in his policies.

Obasanjo said this, while paying a host to Buhari who visited him at his hilltop residence in Abeokuta, as part of his campaign for his presidential election. His visit came, barely hours after the President and the presidential candidate of the People’s Democratic Party (PDP), Goodluck Ebele Jonathan, visited the former president.

Despite the insistence of Obasanjo at several occasions, that he remained a member of the PDP, Buhari called for his support in the coming presidential election.