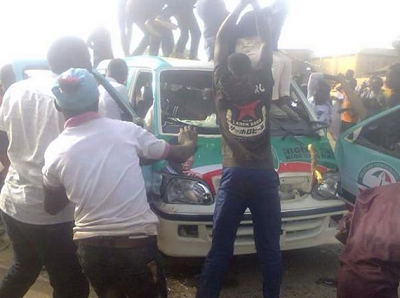 Sources familiar with the political developments that led to the destruction of the president’s re-election campaign bus at Zololo junction, Bauchi Road, in Jos, Jos North Local Government area of Plateau State, said the youth were expressing their frustration at the imposition of the Peoples Democratic Party, PDP, governorship candidate in the state, Senator Gyang Pwajok by Governor Jonah Jang. Luckily, the driver of the bus was reported to have escaped unhurt.

But Buhari, who is Jonathan’s main challenger in the February 14, 2015 presidential poll, said he does not accept any supporter who resorts to violence.

‎”I have received news of violence in Jos today. I condemn this violence in its entirety. I reject any supporter who resorts to violence. Like I said after the attack on our supporters in Rivers this week, elections are not war. Electoral violence is unacceptable”, the APC presidential candidate said in a Twitter post.

He also called on the ruling PDP ‎to condemn the attack and sue for peace as the life of every Nigerian citizen is sacred.
‎
“We can and we will bring #Change to Nigeria peacefully. I call on the PDP to join this call for peace. Every Nigerian life is sacred”, he urged. ‎

‎Meanwhile, President Jonathan has condemned what he called the “violent destruction of supporters’ assets”. 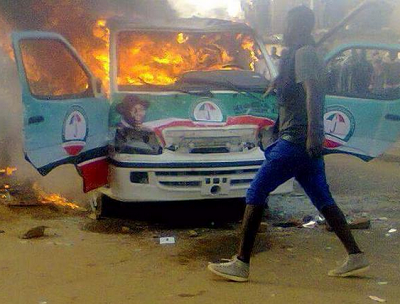 In a terse statement by his Special Adviser on Media and Publicity, Reuben Abati, while reacting to the destruction of a campaign bus bearing his image and the PDP logo in Jos on Saturday, the president called on his supporters to pursue peace even in the face of provocation.

“On violent destruction of supporters’ assets, President Jonathan calls on his supporters to pursue Peace in the face of undue provocation”, Abati said.

The president reiterated his call for politicians and their supporters to conduct their electoral campaigns with highest possible decorum and civility towards political opponents.