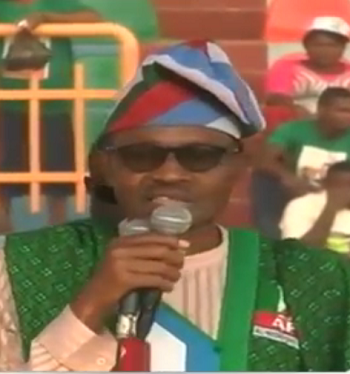 The presidential candidate of the All Progressives Congress (APC), Gen. Mohammadu Buhari (retd), on Saturday pleaded with the electorate to ensure they collect their Permanent Voter’s Cards to enable them vote during the general elections next month.

Buhari, who spoke during his campaign held at the Ekiti Parapo Pavillion, Ado Ekiti, Ekiti state, also urged them to stand by their votes to guard against rigging.

Gen Buhari said: “What you would do to help us effect the necessary change is to collect your voter’s cards and vote and stand by your votes. Don’t allow rigging or intimidation by anybody”.

The APC presidential flag bearer, whose arrival to the campaign venue at 2pm was heralded by chants of “Baba, Oyoyo!” from a mammoth crowd, vowed to fight insecurity, unemployment, corruption and equip schools.

He also said he would create more jobs through commercial farming.

“We’ll also help to make sure that unemployment is quickly rectified by introducing large-scale farming and mining. This will quickly help the able-bodied, especially youth, who are over 60 per cent of the population, that are now painfully unemployed”, Buhari said, warning that “we are sitting on a keg of gun powder”.

His running mate, Prof. Yemi Osinbajo (SAN), while addressing the supporters, said the support being given to the APC across the country was already creating fear in the Peoples Democratic Party (PDP), a situation he said was making them to call for the postponement of the election.

“But we will not allow that and I am sure Ekiti people will not support any postponement of the election. They are afraid because their time is up. The time for change is now, when you vote, stay there and don’t allow any magic this time around. You have seen magic before, let there be no magic again”, Osinbajo added.

The National Chairman of the party, Chief John Odigie-Oyegun urged the electorate to vote out President Goodluck Jonathan, saying the PDP government since inception had brought untold hardship to Nigerians through hunger, unemployment, insecurity, corruption and bad leadership.

Oyegun said the APC-led government would keep its promises and ensure good governance in the country.

The national leader of the APC and former governor of Lagos state, Asiwaju Bola Tinubu said retired Gen. Buhari was coming on board to rebuild Nigeria “at this critical time of Nigeria’s history”.

Addressing the claim by Governor Ayodele Fayose that Buhari is too old to govern, Tinubu labelled the governor a bad student of history. “When there was a problem in America of economic recession, they called Ronald Raegan at 72 to govern, to rescue American economy. We need wisdom of elders at the time of any crisis”, he stressed.

Some PDP leaders in the state, led by a former speaker of the state House of Assembly, Mr Patrick Ajigbolamu, defected to the APC and were received by the national chairman of the party.

Also at the campaign, the former governorship candidate of Labour Party in the June 21 governorship election, Hon. Michael Opeyemi Bamidele, was introduced to the delight of the crowd as he mounted the podium to declare support for the candidature of Buhari and Osinbajo in the election.