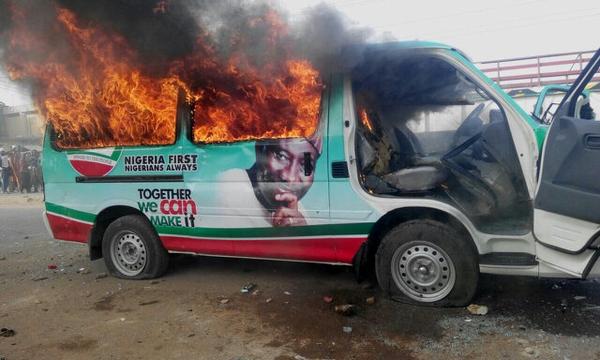 The Presidency has condemned the burning of vehicles belonging to a pro-Goodluck Jonathan campaign organisation in Jos, the Plateau State capital.

Two buses belonging to the organisation were destroyed and burnt down at Zololo Junction along Bauchi Road in Jos North Local Government Area of Plateau State on Saturday by irate youth, who were reportedly chanting slogans in favour of another presidential candidate.

In a statement on Sunday, the Special Adviser to the President on Political Affairs, Prof. Rufai Alkali, said the burning of the vehicles has demonstrated the level of the desperation of the opposition and their plot to intimidate others out of the political space.

He said the incident would not deter Mr. Jonathan from ensuring free and fair elections were conducted nationwide next month.

“We have observed a dangerous trend of politically motivated violence unleashed on innocent Nigerians by supporters of those who have shown desperation to assume political power at all costs”, Mr. Alkali, in the statement titled “This ugly trend must stop”, said.

“While we are not surprised by acts of desperation already shown by these people who have no articulate agenda for nation building, we are amazed at how quickly they are willing to manifest their evil intentions on our dear country.

“The incidence in Jos, Plateau State where our campaign vehicles were torched by irate youth supporters of the APC underscores the need for vigilance as we progress towards the General Elections. This criminal behaviour, which is meant to intimidate others and deny them their freedom of choice, stands condemned”.

The political adviser stressed that leaders whose utterances and conduct had encouraged this kind of behaviour must bear full responsibility for the conduct of the violent youth.

He said with the way things are going, it would “seem the ultimate agenda of making Nigeria ungovernable as prophesied by these politicians is underway”.

“Nigerians are well aware of these antics and are fully prepared to protect their rights to freedom of choice.

He reiterated that the Federal Government is determined to ensure no Nigerian was prevented from campaigning in any part of the country. He, therefore, called on the law enforcement agencies to protect and guarantee the safety of every Nigerian legitimately canvassing for votes all over Nigeria.

“We invite law enforcement agencies to note the pronouncements of desperate politicians who are bent on fanning the embers of hate and threaten the peaceful conduct of the 2015 elections.

“We once more wish to reiterate the commitment of President Goodluck Ebele Jonathan to a peaceful and rancour free electoral process. He has said times without number that his ambition is not worth the blood of any Nigerian”.

The presidential aide also called on the members of the PDP and supporters of the president to exercise restraint and show maturity even in the face of extreme provocations.

“We must show a difference in our conduct and prove to agent provocateurs that we have the temperament and composure to tolerate dissent without decent to mob action”, he said.

He warned politicians to desist from this vicious circle of lies, rumours, intimidation and violence.

The statement, however, failed to take cognizance of the fact that Mr. Buhari was the first to condemn the attack on the campaign buses immediately he got wind of the incident.

In a terse statement released few hours after the attack, the APC presidential candidate said: “I have received news of violence in Jos today. I condemn this violence in its entirety. I reject any supporter who resorts to violence”.