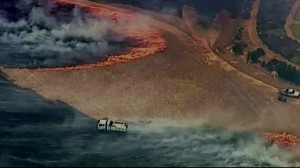 Not less than 30 homes were feared destroyed in South Australia as crews continue to battle out-of-control bushfires. About 800 firefighters are tackling the blazes, which reports say have been burning for several days in the hills around the city of Adelaide. BBC was there:

Officials say the fires are the worst in the area since the Ash Wednesday bushfires in 1983, which left 75 dead.

Cooler weather may help firefighters tame the flames, which have been fanned by high winds and temperatures.

“We’re by no means through this particular emergency,” he said.

“Homes are being threatened, there are people in the path of this fire front at the moment. It’s a very serious situation.”

He said 12 homes had been confirmed destroyed in the Adelaide Hills with another 20 also feared lost.