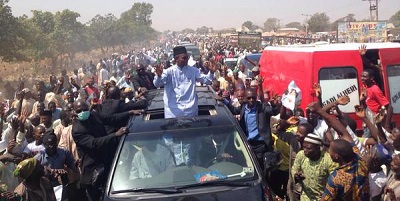 The governorship candidate of the All Progressives Congress in Kaduna State, Malam Nasir el-Rufai, on Monday said that with God on his side, change was inevitable in the state in February.

He stated this in Zaria as he continued his statewide governorship campaign.

The APC candidate was warmly received by thousands of supporters at the Zazzau Emirate, who literally grounded activities in the city to a halt.

El-Rufai said the significance of the crowd that ushered him into Zaria was a proof that change was inevitable, adding that a new dawn beckoned for rapid development and purposeful leadership in the state.

According to El-Rufai, who was accompanied by hundreds of APC leaders, the move for change is also justified by the failed leadership and myriads of challenges in all parts of the state by the Peoples Democratic Party-led government.

The APC governorship candidate called on his teeming supporters to shun political violence, noting that only God gives power to whom he wants.

He said, “It is Almighty God that gives power and we are seeking this power from Him and the people of Kaduna State. And so, don’t fight anyone, don’t abuse anyone, don’t blackmail or insult people because of political differences.

“Don’t abuse people’s parents; instead, respect them because they are also our own parents and we hold them in high esteem.

“Don’t return violence for violence, don’t destroy peoples’ posters, billboards and properties because they did same”.

The former FCT Minister insisted that the state was in dire need of purposeful leadership to pilot the affairs of the state, adding that the state is in search of a competent and capable sailor and crew to sail our state out of the storm.

He said, “I am emotional and touched because of the way and manner we were received, we were received with total acceptability, trust and confidence that we have all it takes to rebuild our dear state.

“Our state is in need of direction, focus and practical leadership that will bring about justice, development and purposeful leadership to manage our complexities.

“We are in the middle of this dangerous navigation, but we are confident that by the special grace of Almighty God, we will sail to safety. It is not about us but what is best for tomorrow and the future”.