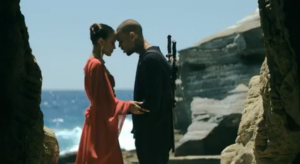 It’s the latest trend for American artistes and Chris Brown has followed through. Although he might regret in the future, Chris Brown who is used to breaking his relationships has taken a bold step.

Chris Brown has featured Karrueche in his new music video. The two have been dating on and off for four years now and this is the first time he has featured her in one of his music videos.

The song is titled Autumn Leaves and features Kendrick Lamar.