As Nigerians prepare to cast their votes for their favourite candidates in the up-coming Presidential, Gubernatorial and Legislative elections around the country, various groups, organisations, countries, international bodies and non-governmental organisations have continued to use various means to sue for peace among the political class and their supporters. 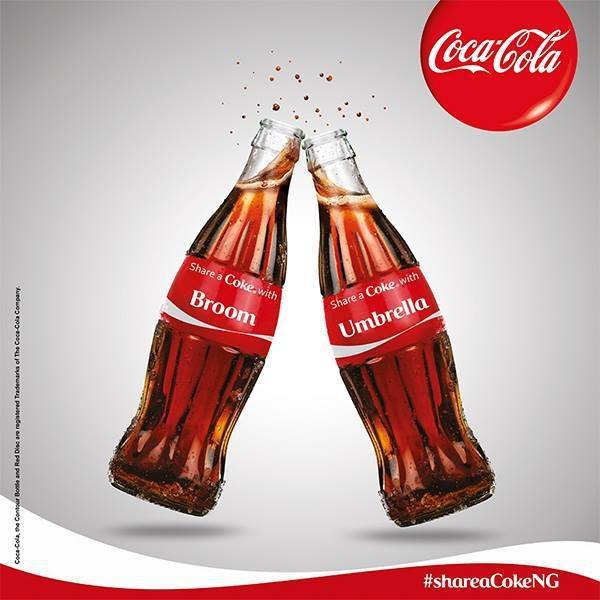 One of such organisations is giant beverage company, Coca-Cola. The company which was sued by the Federal Government at a federal high court in Abuja over a supposed criminal break of the Consumer Protection Council (CPC) Act two months ago is using  its recent advertising campaign to promote peace in Nigeria before, during and after the general elections.

The Coca-Cola ad campaign which has been running for sometime now has seen the beverage company use the names of Nigerians in many of its bottles as a way of customizing the bottles.

The company took its campaign a notch higher recently by releasing a picture of two customized bottles with the words ‘Broom’ and ‘Umbrella’ signalling the two major political parties in Nigeria, All Progressives Congress (APC) and Peoples Democratic Party (PDP).

The two bottles with the name of the parties on them were then ‘joined’ together from the top to signal unity among the political parties.

Indeed, the company should be commended for using a creative spin to advance the cause for peace in the upcoming elections.

Whether Nigerian politicians will adhere to the message in the ad campaign remains to be seen.

It will be recalled that the Coca Cola Company was recently told by popular human rights lawyer, Femi Falana to adhere to Nigerian laws and comply to the CPC.