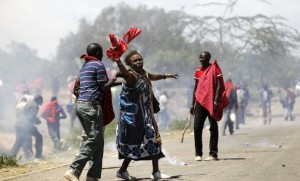 Not less than seven people were injured on Monday in clashes between the Kenyan police and protesters from the Maasai ethnic group who accused a local governor of corrupt handling of tourism funds from the Maasai Mara game reserve, the Kenya Red Cross has said. Read more from Reuters:

Kenya television said at least one person was killed during the violence, in which witnesses said police used teargas and fired shots as thousands of Maasais clad in traditional red cloaks marched to the governor’s office.

Police had no immediate comment on the report and the Red Cross did not report any deaths.

At the gates of Governor Samuel Tunai’s office in Narok town, the administrative center of the sprawling Maasai Mara game park, demonstrators chanted: “Tunai must go.” Some hurled rocks.

Visitors to the Maasai Mara, one of Africa’s biggest tourist draws, pay $80 per day to roam an area full of wildlife such as lions, rhinos and giraffes. Upmarket lodges and luxury tented camps can charge hundreds of dollars per person per day for the experience, although a spate of militant attacks in Kenya as well as the Ebola epidemic on the other side of Africa have scared off many tourists.