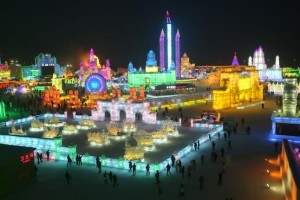 The International Ice and Snow Sculpture Festival has started in China with sculptures including a steam train, ice slides, an ice maze and several ice castles, which were all made from ice. UPI witnessed the event:

The 31st annual festival in Harbin began officially Monday after a limited preview Sunday and thousands of people came out to view the intricate sculptures and brave attractions including the maze and slides.

Sculptor Ji Huailong, who created a giant Cupid ice sculpture for the festival, said carving ice is a tricky undertaking.

“The most difficult parts to sculpt are the face and the eyes. We are carving Cupid so he has to look like an angel coming from the sky, he represents love,” Ji told The Telegraph. “His features need to be cute, soft and harmonious.”

Ji said his creation took about 24 hours to finish.

“First some workers dig the ice blocks. Then we sculptors start carving the outline then the design. Then we use some specific tools to get out the details,” he said.