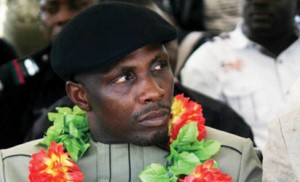 Speaking to newsmen at the permanent site of the multi-billion naira North-West University, Kano, Danjuma described the statements from the ex-militants as reckless and irresponsible.

“Those were reckless statements coming from irresponsible individuals; they should be condemned and be arrested immediately”.

Danjuma’s comment came following the statements of the ex-militants at a meeting with Bayelsa State governor, Seriake Dickson n Yenegoa, where they threatened to declare war against the country in the event that President Jonathan loses his re-election bid.

The oil magnate further cautioned on the need to reverse the current trend where politicians were instead of speaking about issues that has to do with governance, enjoy denigrating one another ahead of the general elections. He described such practice as counter-productive to democracy.

He commended the Kano State Governor, Rabiu Kwankwaso, over the infrastructural development of the state. He noted that the the governor was leaving a legacy worth emulating by other stakeholders in the polity. He expressed hope that Kwankwaso’s successor would consolidate on the achievements on ground to make Kano State even better.