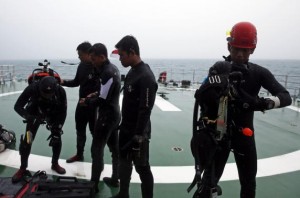 Search teams as well as divers took advantage of a let-up in bad weather on Tuesday and tried to reach the wreckage of an AirAsia jet, but nine days after the plane crashed officials said there was still no sign of the crucial black box flight recorders. Reuters report:

Indonesian officials believe they may have located the tail and parts of the fuselage of the Airbus (AIR.PA) A320-200 at the bottom of the Java Sea, but strong currents, high winds and big waves have hindered attempts to investigate the debris.

Flight QZ8501 plunged into the water off Borneo island on Dec. 28, about 40 minutes into a two-hour flight from Indonesia’s second-biggest city of Surabaya to Singapore. There were no survivors among the 162 people on board.

Jakarta has launched a crackdown on its fast-growing aviation sector since the crash, reassigning some officials and tightening rules on pre-flight procedures in a country with a patchy reputation for air safety.

“Today’s weather is friendly, the team can work,” the head of Indonesia’s search and rescue agency, Fransiskus Bambang Soelistyo, told a news conference in Jakarta.