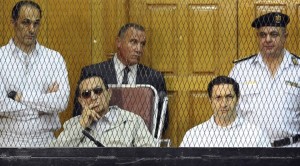 A lawyer representing the sons of Egypt’s ousted President Hosni Mubarak said that a court has ordered their release on Thursday pending retrial in a corruption case but judicial sources said they would not be freed till prosecutors review other legal cases against them. Reuters was there:

Lawyer Farid el-Deeb said the order for the release of Alaa and Gamal Mubarak pending the retrial should mean they immediately walk free because he said they were not being tried in any other cases.

The Mubarak brothers do still face charges of stock market manipulation in a separate case, but in June 2013 a court ordered their release in that case.

Given that a court dropped other corruption charges against the sons in yet another case in November, it appeared there were no other cases preventing their release.
http://www.airmaxfreedom.com nike air max womens
The Cairo Criminal Court said in a document explaining its ruling that the two men had already served the maximum permitted time of 18 months in pretrial detention and should therefore not be held pending their retrial in a corruption case.