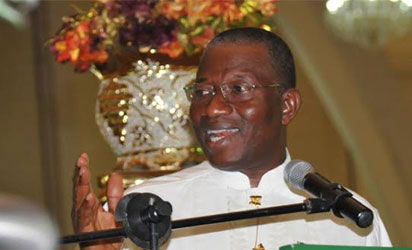 President Goodluck Jonathan on Thursday felicitated with all Nigerian Muslims as they commemorate the birth of Prophet Mohammed on Friday.

In a statement by his Special Adviser on Media and Publicity, Dr. Reuben Abati, the president called on Muslim faithful to use the opportunity provided by the Eid-el-Maulud to offer special prayers for successful and peaceful elections in the country next month.

Mr. Jonathan reassured Muslims and all other Nigerians that the Federal Government would do all within its powers to ensure that the general elections in February are free, fair, credible and violence-free.

The statement read, “President Jonathan believes that this is essential to guarantee that Nigeria remains politically stable and continues on a steady path to the fulfillment of its peoples’ collective vision of a strong, united and prosperous nation.

“The President also calls on all adherents of Islam in the country to seize the opportunity of the New Year and Eid-el-Maulud holidays to reflect deeply on the need for a greater application of the Prophet Mohammed’s teachings of piety, charity, tolerance, justice and peaceful co-existence with others in the collective effort to overcome current national challenges.

“President Jonathan assures the Islamic faithful and other Nigerians that his administration will continue to be guided by the ideals of fairness, equity and justice for all in its leadership of the country and that on his watch as President, no Nigerian will ever be discriminated against on the basis of religion, ethnicity or social standing.

“He reaffirms his personal commitment to working diligently and tirelessly to ensure the successful implementation of the Federal Government’s agenda for national transformation and urges Muslims and all other Nigerians to support the continuation of the present administration’s efforts to build a better nation.