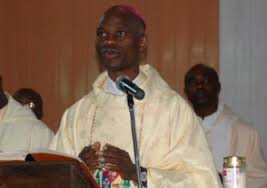 The Catholic Bishop of Ekiti diocese, Most Rev. Felix Ajakaye, has called on politicians canvassing for elective positions to discuss ideas and policies that would enhance the growth and development of the country and desist from focusing on personal issues that heat up the polity unnecessarily.

In a statement made available to journalists on Sunday in Ado-Ekiti, Ajakaye said he was not aware of the online report until he started receiving calls from concerned people.

He said, “A news story was published in 2012 by The Punch and some newspapers on my comment on the alleged statement by Maj. Gen. Buhari (retd.) after the 2011 general elections in Nigeria. It is the story the dirty people are now manipulating as an interview I just granted in 2015”.

He described the online publication as a practical example of “politics of desperation and manipulation”, saying those behind the recycled story were agents of “division and darkness”.

The bishop, who said the country was passing through a difficult time called on all Nigerians including religious leaders to come together to avoid the total collapse of the country.

“Inevitably this is the actual time for change and we must not allow the wind of change to pass us by.

“All of us, including religious leaders, must work together for this change if we do not want Nigeria to collapse totally”, he said.

While calling for the sincerity of all stake holders towards ensuring credible polls, the bishop called for the independence of the judiciary and prosecution of anybody found culpable in election rigging.

“In the same way, the judiciary must live up to its expectation. It must maintain its independence and identity, rather than be in the pockets of the executive. To avoid unnecessary tension and crisis in our society, the judiciary must strive to speed up the various election petitions”.

While describing politics as a clean game, which he said was for service and good governance for the benefit of mankind, the bishop agreed that there were “dirty people in Nigeria” who engaged in politics.

Such people, he said, were in politics to acquire power, prestige and money and could do anything to achieve their inordinate ambition.