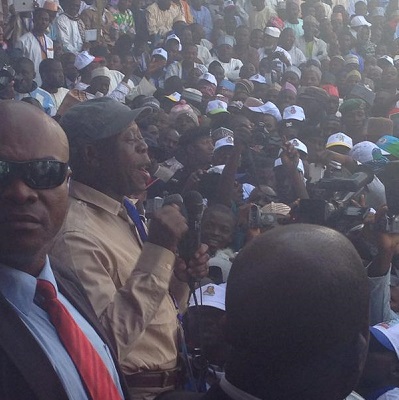 Gov. Adams Oshiomhole of Edo on Tuesday expressed confidence in the ability of APC governorship candidate for Kaduna, Malam Nasiru El-Rufai, to rebuild the state, if elected.

Oshomole said in Kaduna at the inauguration of APC governorship campaign in the state that El-Rufai would bring about cogent development and genuinely unite the diverse peoples of the state.

He said: “I am here to affirm that Malam Nasir El-Rufai will rebuild Kaduna state, he will revive the lost glory of the state and fix things right.

“He is a practical and hard working man. Do not believe those that will continue to use religion and differences to confuse and retard development.

“He has done it in the past and will do it again; he has the capacity and basic requisite knowledge needed to rebuild Kaduna state.

“Those of us who lived and worked in Kaduna in the past can testify that we need El-Rufai and the APC manifesto.

“I am equally calling on all citizens of the state to give APC a chance and they will see the difference”, he said.

APC National Chairman, Chief John Oyegun, in a message to the event, described El-Rufai as a competent and tested leader that would bring about positive change to the state.

Oyegun, who was represented by his deputy, Sen. Lawal Shuaibu, pledged that APC would ensure sacrifice and result-oriented leadership that would bring about national rebirth and genuine development. (NAN)