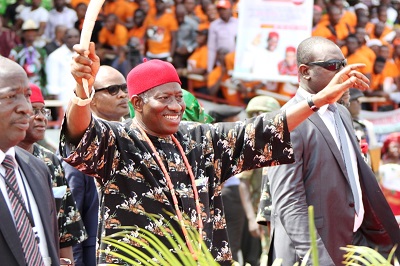 Governor of Ebonyi State, Martin Elechi, was conspicuously left in the cold during the Peoples Democratic Party, PDP, presidential campaign rally for President Goodluck Jonathan in Abakaliki, the state capital, on Friday.

The governor, who has lost control of the PDP structure in his state, was not given an opportunity to speak at the rally, which held at the Abakaliki Township Stadium, as is the tradition.

He was slated to speak on item nine of the official programme of the rally, but for undisclosed reasons, he was ignored throughout the event, where the National Chairman of the PDP, Adamu Muazu, handed the flag of the party to the party’s governorship candidate in the state, Dave Umahi, who also happens to be Elechi’s deputy.

Elechi’s loyalists, who did not participate in the primaries that produced Umahi as the governorship candidate of the PDP, had reportedly moved to the Labour Party.

The governor was also booed at the event by a section of the crowd, which turned out for the rally.

But the unruly behavior of the crowd had prompted the immediate past governor of the state, Dr. Sam Egwu, to speak up for Elechi, urging everybody to remember that the governor remained the leader of the party in the state and therefore deserved respect.

“I want to ask you please, no matter your personal grievances, we have a governor that is in charge of the state. He is our governor and you must, as a matter of principle and authority, respect him.

“Forget whatever are your personal grievances; the governor is the governor of this state and he is our governor and you must give him all the respect he deserves.

“If you are somebody, who has personal grievances, take it outside this place. We have Nigerians before us here; we have the President of the country before us here. So, please, I plead with you”.

Speaking at the rally, President Jonathan promised that if voted into office for a second term, he would upgrade infrastructure, institutions and industries within the state.

Stating that the Abaliki rice was already popular, the president said “What we want to do is to improve on our farming, the quality of our produce, cassava and so on. It will surely key into our rice revolution.

“We will develop young men and women that will go into commercial agriculture. We must work with people in Ebonyi State to encourage small and medium scale industries. That is the only thing we will do to create to job. Ebonyi State luckily has a lot of minerals. With the drop in the oil price, government will surely diversify the economy. Solid minerals and agriculture are some of these areas that we will go in”.