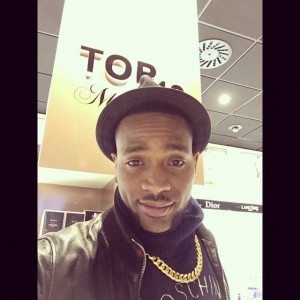 Hmmm……..this is becoming more than a rumour now as more details keep developing to form a much bigger story.

The Kokomaster, D’banj is allegedly broke. According to Encomium magazine, D’banj now finds it difficult to pay his staff salaries and many of them them have called it quit.

Read their report below: –

IT has again emerged that pop star, D’Banj is allegedly broke.  ENCOMIUM Weekly’s highly reliable sources have confirmed, claiming that the A-list artiste now finds it difficult to pay his staff.

We were told that some of his personal staffers are grumbling over unpaid salaries even as many have called it quits with his team.

“D’Banj and some of his workers are at loggerheads over unpaid salaries.  Chu-Chu and Moses have already been withdrawn from his management for now.  Things are no longer at ease with the Koko master.”

Late last year, news filtered into town that the millionaire artiste might be sued for a debt of over $240,000!  A technology company, MindHub Technologies headed by one Henry Ojogho claimed he is even owing the company yet another N15 million.

According to MindHub, D’Banj, through his company, DKM Media Limited, obtained a loan of over N60 million from them in January 2013, and has not paid back the said sum despite signing an undertaking to do so.  In addition, the technology company claimed that the entertainer has issued two cheques already, one on December 20, 2013 and another on January 20, 2014, both of which had to be returned unpaid after presentation because the pop star’s account was not liquid enough to offset the debt.

MindHub had threatened to drag the Koko master to court this month if he failed to clear the $240,000 he allegedly owes the technology company. It is unlikely that D’Banj has settled with his alleged creditors.

It has also been rumoured that the artiste equally has troubled business transactions with some prominent Nigerians, the facts of which have not been ascertained by ENCOMIUM Weekly.

Interestingly, D’Banj has maintained disturbing silence on the heels of the many debt scandals he is swimming in.  The much he had said about this was a tweet, “Silence…Hear (sic) is my response to the false rumours.”

He also told ENCOMIUM Weekly before the tweet he sent out weeks back, that his response is the video of his collaborative remix of Oritsefemi’s Double Wahala.  He spoke through his promoter, Ayo Shonaiya.

Fresh efforts to hear from D’Banj on Saturday, January 10, 2015, was not fruitful as the celebrated entertainer didn’t pick his call. He also didn’t respond to the allegation of owing staff salary as a result of his alleged financial travails.

Our SMS read: “Sir, ENCOMIUM Weekly wants your reaction to fresh allegation that you owe some of your staff.  Rumours even have it you’ve disengaged some of them.  We need to hear your side of the story.  Thanks, Associate Editor.”

D’Banj’s silence has given credence to speculations that the talented crooner, who has a management deal with Kanye West’s Good Music team is going through financial stress.

His visibility during the yuletide and release of a single has not changed this perception.

A multi-millionaire and entrepreneur, Dapo Oyebanji (that’s his real names) has scores of investments that span oil and gas, manufacturing, merchandising, among other business concerns.

Together with his erstwhile partner-producer, Don Jazzy, he confessed he shared over N1 billion  (in Mavin Records) before he pulled out of the group in 2012.

The 2020 NAACP Image Awards has seen the likes of Beyoncé and Blue Ivy, Lizzo, Billy Porter, Sterling K. Brown amongst others snagging a nomination or two. The award is...
Read more

Fast-rising actress Bukola Kitan has made it known that she is not one to act normally when in love. In an interview with Saturday Sun,...
Read more
- Advertisement -