According to report, 19-year-old Anna is 2-months pregnant for the 31-year-old highlife singer.

A source who knows the former beauty queen told Pulse: “You can’t get Anna to stop talking about Flavour, she’s madly in love with him. He’s very fond of her too. They look so perfect together.” 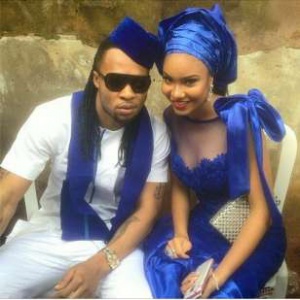 “Anna is happy, she looks happy she’s having the child for the love of her life. I just hope she can handle the whole thing, she’s such a young girl,” another source added.

Anna, who enrolled in the Middlesex University in Dubai, United Arab Emirates (UAE) back in September 2014 is currently holidaying in Nigeria and sources say she is confused about the situation as the UAE frowns at pregnancy outside wedlock.

When contacted, Flavour’s manager who neither confirmed nor denied the story said he was not in the place to discuss his artiste’s personal life.

There have been speculations that Anna and Flavour were in a romantic relationship and were very fond of each other.

About 3-months ago, the 19-year-old model, actress and entrepreneur took to her Instagram page to post a photo of Flavour which she tagged, ‘my boo’.

The couple made headlines in early December when Flavour released his much talked about ‘Golibe’ music video which starred Anna as the lead girl. The couple got married in the storyline of the video.