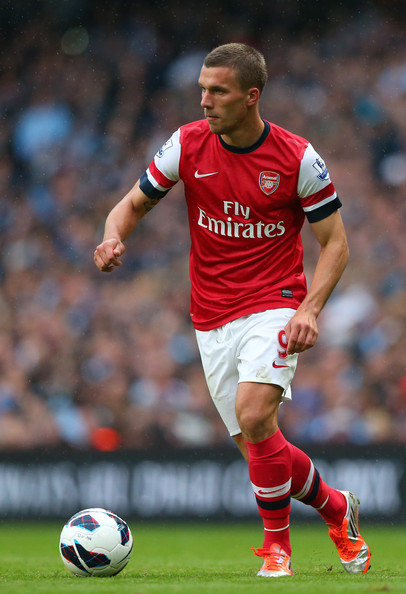 Arsenal striker Lukas Podolski could be on his way out of the North London outfit due to lack of first team chances, Information Nigeria understands.

The 29-year old has seen his playing time limited at Arsenal, as Arsene Wenger has opted to use Danny Welbeck on the left flank, a move that has frustrated the German International to try to force his way out.

Wenger though has expressed his desire to keep the former Cologne striker, squashing rumors of a potential move to Intermilan.

“They talk,” Wenger is quoted on Guardian Uk. “There is only talks. Podolski is a player of Arsenal football club and I want him to stay. Apart from that, what it is to be professional is that as long as you are somewhere, you give your best to justify your wages and your love for the club. I hope that he will still be an Arsenal player at the end of January. Inter? That is a joke. Inter is not serious.”

However, the player seems determined to leave in the New year.

MirrorFootball reports that Podolski refused to train at the Gunners’ Hertfordshire HQ after complaining of a groin injury, and is therefore not in the squad for the New Year’s Day game at Southampton.

Inter Milan are hoping to sign Podolski this January. Roberto Mancini 4-2-3-1 formation is in need of a quality and experienced player in the wide areas, and the former Manchester City manager believes Podolski is the right candidate for the roles.

Arsene Wenger has his hands full in the attacking department unlike in defense. The Gunners boss is reluctant to use Podolski even in situations where his brilliance comes handy.

Danny Welbeck is the manager’s choice on the left flank. Wenger is a man that believes in his policy, so unless Welbeck is injured, Podolski would have to content himself with coming off the bench.

But he (Podolski) isn’t getting any younger. He deserves to be starting especially with his qualities, so he could leave this Janaury. There are certainly many clubs interested in his services, most notably Inter and Galatasaray.

Sources have told Information Nigeria that Arsenal may listen to offers that include a permanent deal over a loan.

Arsenal play away to Southampton by 4pm Nigerian time.