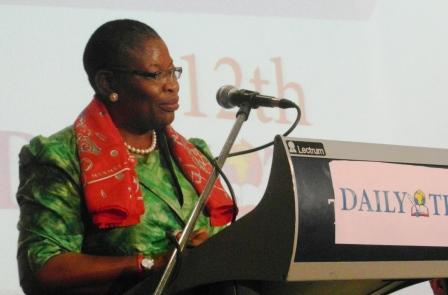 A former Minister for Education, Dr. (Mrs) Oby Ezekwesili, wept for Nigeria on Thursday over its citizens’ losing empathy they need to stand as a nation.

Mrs. Ezekwesili broke down in tears over tragedies suffered by countless Nigerians in the past, from the Civil War to the abduction of more than 200 Chibok schoolgirls by Boko Haram last April.

“How could we pick up and move on?” she asked. “All agitations of being marginalised somehow never seemed to have persuaded Nigerians until Jos practically began to go up in smoke”.

According to the former World Bank Vice President (Africa), the same lack of empathy characterised the growth of Boko Haram insurgency, which intensified with widespread bombings and abduction of the Chibok schoolgirls.

“Now our own military repels what started off as ragtag insurgency who, when their effect was not being felt in the whole of Nigeria, expanded their attack.

“The ease with which citizens look away, refusing to be drawn into matters that they consider other people’s problem…is an acceptance of the Equal Opportunity to Suffer Syndrome”.

Speaking in Abuja on Thursday at the 12th Daily Trust Annual Dialogue Series with the theme, “2015 Elections: How to Make Nigeria the Winner”, Ezekwesili said, Nigeria has been winning by successful transitions in the past, but it was time for Nigerians themselves to win.

“It is time for the people to win. In the 54 years of fighting to control power, it is time to change that paradigm”, she said. “Hello to the 70m citizen winners of the 2015 elections. You are more powerful than you look but that only happens when you make informed decisions”.