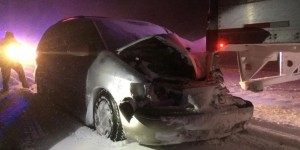 A couple called 911 during a storm and thereafter described how they were trapped in their minivan while it was dragged for 16 miles along Interstate 75 in northern Michigan after it became lodged beneath the rear of a tractor-trailer.

The Grand Rapids Press (http://bit.ly/1KoLUzi ) posted about three minutes of a call Matthew and Pamela Menz made early Wednesday to Roscommon County’s 911.

The couple and their two adult children were in the minivan when Matthew Menz struck the rear of the semi-truck during white-out conditions about 2 a.m. Wednesday.

“We ran into the back of a semi-truck and he’s not stoppin’, and our car is embedded underneath of it,” Pamela Menz told the 911 operator.

The family was unable to give their exact location for deputies trying to find the truck.

“We shouldn’t be hard to find,” said Matthew Menz, who became more concerned when it appeared the truck was picking up speed.

“If the van breaks out from underneath him, I don’t have any control of this thing,” Matthew Menz said. “Wherever your officers are I’d appreciate if they get in front of him and stop him.”

Police say the truck driver was unaware that the minivan was lodged beneath it.