Reports reaching us indicate that the auditorium of College of Health Sciences in Benue State University (BSU), Makurdi was on Sunday night razed down by fire.

According to Daily Trust report, witnesses of the unfortunate incident informed that fire gutted the building where lectures and social events were held at about 10pm.

Confirming the fire incident, the spokesperson of the institution, Tse Vande told newsmen that the incident happened as a result of electrical fault.

Vande disclosed that no lives were lost but that the auditorium was totally burnt by the fire.

It was learnt that spirited efforts of sympathisers and students prevented the fire from razing the entire building of the collage.

Meanwhile, an eyewitness, who craved anonymity, alleged that the fire was caused by what he described as the “I don’t care attitude of management,” which would have been averted “if the simple right things are put in place.”

It was gathered that the university had suffered similarly incident mid-last year when a day time inferno destroyed a female hostel situated in the campus and rendered many students without accommodation.

Below are some of the photos taken from the scene of the fire incident: 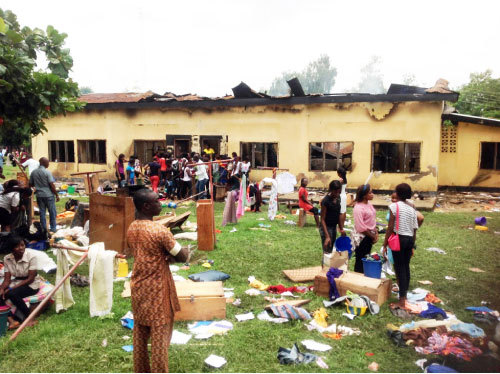