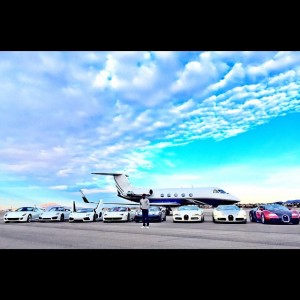 How time flies and situations change.

Just a couple of years ago, Floyd Mayweather was locked up in prison and was dead broke………..fast forward to today and he’s one of the wealthiest sports men in the world.

The pain of boxing is really paying off for Floyd Mayweather as the undefeated middleweight champ who regularly flaunts his wealth on social media, took it to another level.

He shared a pics of himself in front of eight exotic cars including 2 Bugatti Veyron, a Bugatti Gran Sport, 2 Ferrari 458 Spider and a private jet .

He captioned the photos: –

Welcome to my toy world!
Who wants to come out & play?

According to TMZ, Here’s the checklist with approximate market values: –