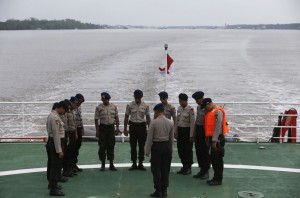 The head of Indonesia’s search and rescue agency said on Saturday that search teams hunting for the wreck of crashed AirAsia passenger jet have found four large parts of the plane on the sea bed. Read more from Reuters:

A multi-national task force of ships, planes and helicopters have been scouring the northern Java Sea and coastline of southern Borneo to recover the bodies of victims and locate the wreck of Flight QZ8501 and its black box flight recorders.

The breakthrough came as authorities said that IndonesiaAirAsia had violated the terms of its licence for the Surabaya to Singapore route by flying on a Sunday, the day the Airbus A320-200 plunged into the Java Sea, and announced they would investigate the carrier’s other schedules.

One large object was pinpointed by a ship searching during the night, Soelistyo said, and three more, the largest of which was around 18 metres long, were located on Saturday.

Another official, Supriyadi, who is coordinating the operation from the port of Pangkalan Bun in Borneo, said earlier that poor visibility had hampered efforts to capture images of the objects with underwater remote operating vehicles (ROVs). “The visibility is only two metres,” he said. “It’s cloudy, making it difficult for the cameras to detect.”