Eighteen-year-old Boluwatife Ajadi had been looking forward to enjoying the New Year festivity with her family in peace and happiness, but she spent it in agony on a hospital bed, hanging on to life.

Boluwatife, who finished secondary school in September 2014, fell victim of a vicious attack by a scorned suitor, a young man who had been seeking her hand in a romantic friendship, around 11pm on
December 30, 2014.

But the culprit, 21-year-old Sakiru Buari, insisted that Boluwatife was his girlfriend.

When our correspondent visited Samas Hospital, a private health facility in Baruwa area of Lagos, there was no way of speaking with Boluwatife. She had been unable to speak since the attack, her family said. The
girl had been induced to sleep by the hospital staff.

Her elder sister, Adeola, who narrated what happened, said she had feared that her sister might not survive the attack which left a long and deep gash on her neck.

A picture of the fresh wound showed part of the girl’s neck, flesh that is almost the size of a palm, hanging loose.

“The man used a razor to cut her neck,” Adeola began. 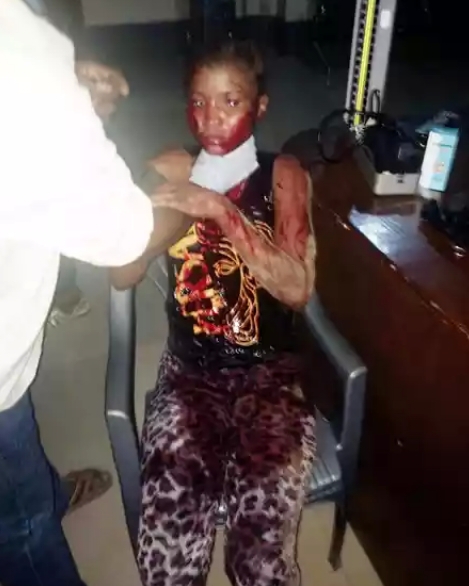 “There was no doubt that he actually wanted to kill her. It all started about 11pm when we were hearing a noise outside our house on Alhaja Wasilat Street, Baruwa. Someone was shouting ‘thief, thief’ and we all rushed outside but I did not realise my sister was not inside with us.

“When I went outside, I saw someone staggering towards us holding her neck. She was struggling to call for help. By the time I realised it was my sister, she collapsed on the ground.”

Saturday PUNCH learnt that soon after the attack, neighbours who had heard Boluwatife’s initial alert for help, were able to catch Buari who had attempted to flee at the time.

“When they caught him, the man was even saying that he regretted that she did not die. All I could do was scream for help as I went to where my sister collapsed.

“At that time of the night, nobody was willing to help us. No vehicle stopped for us to take her to the hospital. At a point, I had to go to the middle of the road pleading for help.

“Eventually, a young man at the scene picked her up from the ground and carried her towards the nearest hospital with
the help of other eyewitnesses.”

By the time Boluwatife got to the hospital, she had lost so much blood that her soaked clothes were dripping blood, it was learnt.

Banging on the door of the hospital with screams, those who carried Boluwatife were admitted into the compound as the doctor on duty went to work on the barely conscious girl.

Adeola, said she had never seen the man who attacked her sister before that day and was sure he was not her sister’s boyfriend.

“The man must not escape justice,” she said. Their father, Gabriel, said he was not at home at the time of the attack but could not imagine what could have pushed the man to want to kill her daughter.

He said, “I even thought she was dead when I was called to the scene and saw the amount of blood on the ground.

“The place looked like a slab where an animal had been slaughtered. We are lucky that residents of our street called the beast who did this to my daughter.

“He said it to my face that he had no regret for what he did and was even angry that she survived the attack. At least, we are happy that he had confessed to the attack and we cannot wait to see him off to jail.”

The police at the Ipaja Division, Baruwa, have taken Buari into custody with promises that the suspect would be prosecuted appropriately since he had confessed to the crime.

The Divisional Police Officer, Mr. Ajewole Adebayo, a Chief Superintendent of Police, said Buari would be transferred to the Department of Criminal investigations, Yaba, Lagos, as soon as his men had finished their part of the investigations.

When our correspondent and child and woman rights activist, Esther Ogwu, visited the police division, Buari, who was still wearing the clothes soiled with bloodstains, had caked blood on his hands.

“I don’t know what came over me at the time,” he said. The young man who said he was from Abeokuta, Ogun State, explained that he dropped out of school in senior secondary year one.

“She is my girlfriend and I don’t have any reason to kill her. We did not fight. I just don’t know the spirit that came over me at the time I brought out a razor and slashed her neck. I know now that what I did was
terrible,” he said, as he looked away with.
Buari said both his parents were dead and that the only known relation he had was in Abeokuta.

He said he works as a barber even though he did not have a shop of his own.

Ogwu, who has taken over the girl’s case, said that the most important evidence of the case would be the explanation of the victim herself.

“Unfortunately, she is not in any condition to speak at this time. But like every case of assault involving women, we would ensure that the girl gets justice in this case,” she said.