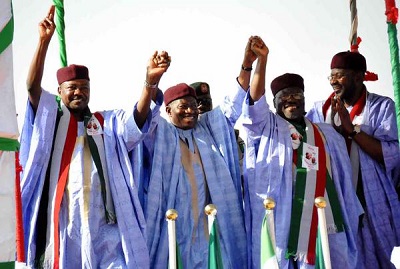 A former Governor of Borno State, Senator Ali Modu Sheriff, yesterday vowed to send the incumbent and governorship candidate of the All Progressives Congress, APC, Alhaji Kashim Shettima parking from Government House in the general election next month.

Sheriff, who anointed Shettima as his successor in 2011, fell out with the governor over control of the APC structure in the state. Several attempts to reconcile them by the likes of Alhaji Kashim Imam failed, culminating in the defection of Sheriff to the Peoples Democratic Party (PDP).

Sheriff, who was speaking during the campaign rally for President Goodluck Jonathan in Maiduguri, singled out Shettima as the political figure he wanted to unseat. “We would remove Kashim Shettima from the Government House in the forthcoming election”, Sheriff said.

“Mr President, hold me responsible if Borno is not delivered to the PDP when a free and fair election is held”, he added.

Shettima will face stiff competition for a return to the Borno Government House from a former state chairman of the defunct All Nigeria Peoples Party (ANPP) and anointed candidate of Mr. Sheriff, Mohammed Imam.

Meanwhile, Sheriff’s former deputy for eight years, Adamu Yuguda Dibal, yesterday reacted to the ex-governor’s boast, saying he was “building castle in the air” when he announced at the rally that the incumbent governor could not secure 30% of votes for the APC in the February elections.

Dibal said contrary to the claim by Sheriff, “the reverse is actually the true situation in Borno”.

“I have worked with His Excellency, Ali Modu Sheriff, for eight years as his deputy when he was the governor. I have never joined issues with him even in private but I felt really ashamed when I watched him today (Saturday) speaking before the president at the PDP rally that Governor Kashim Shettima can’t get 30% of votes in Borno and I asked myself whether he was talking about the Borno we all know or a different place. I don’t mean to be disrespectful because it is not in my character but we have a duty to tell the truth for the sake of Allah, for our conscience and for posterity.

“I know his capacity and what he can do or what he cannot do and what I know is that he is completely unpopular as the reality on ground shows. Forget whatever people he can hire from Gombe, Bauchi and other places to attend any event like the one they did, I am talking about what is on ground today in Borno State. The truth of the matter is that, the reverse is actually the case contrary to Sheriff’s claim. If Sheriff gets 30% of votes for the PDP, I will consider Kashim Shettima and the people of Borno too generous”, the ex-deputy governor stressed.