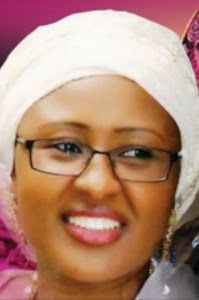 Aisha Buhari, the wife of the presidential candidate of the All Progressives Congress (APC), Muhammadu Buhari, has said her husband will not tamper with the office of the ‘First Lady,’ if it is constitutionally recognised.

Mrs. Buhari told newsmen on the sidelines of the inaugural meeting of the APC women presidential campaign initiative held in Abuja on Saturday.

The wife of the APC presidential flag-bearer was reacting to her husband’s promise to scrap the office of the first lady because it is unconstitutional and allegedly being used to steal public fund.

According to her, where such does not exist constitutionally, she will limit her roles to the traditional functions of visiting orphanages and caring for society’s downtrodden as the first lady.

“`When my husband is elected as the president of this country, he will rule the country within the rule of law based on the constitution of the country.

“If the office of the first lady is constitutionally recognised, he will not tamper with it, but if it is not that’s okay.

“For me, I will perform my duties and role as the wife of the President of Nigeria traditionally.

“They also lead in the fight for the right of women and malnourished children, infant mortality rate, kidnapping and girl-child trafficking,’’ she said.

While inaugurating the initiative, Mrs Buhari urged the women to unite and cooperate with the men by mobilising women at all levels to ensure success at the February polls.

She urged them to double their efforts in educating other women on how to cast their votes and at the same time be civil in their conducts.

“As I am talking to you now, more than 55 percent of registered voters are women hence, it is imperative to have initiatives like this to mobilise fellow women at the grassroots.

“The meeting will plan campaign activities that will show case the potentials of the women wing in selling the programmes of our great party to the women.

“This will include mobilising women by creating voters awareness, particularly in the area of registration, collection of PVC, identifying the party logo and how to cast their votes”, Buhari said.

Also speaking, the wife of the party’s vice-presidential candidate, Oludolapo Osinbajo, stressed the need to assist women and the less privileged in society.

“I am happy that I am a mother, a wife and a sister. It is time to do more than we have been doing; encourage other women so that we all can be mothers of Nigeria.

“Mothers heal, comfort, nurture, provide, and sacrifice. We have this virtue in us and by the grace of God; we will be given the opportunity to express who we are as women.

“We are the ones who set the standard in the family; we decide whether our children will be honest or dishonest.

Present at the inauguration were the wives of the governors of Rivers, Imo and Nasarawa states, the national coordinator of #BringBackOurGirls campaign, and a host of other APC women and supporters.