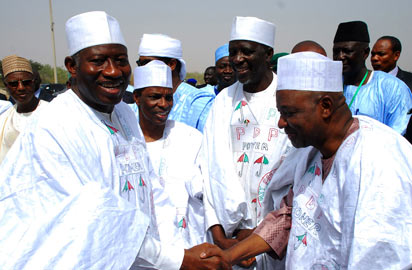 http://www.airmaxfreedom.com nike outlet
President Goodluck Jonathan, yesterday, said his achievements in the north lays credence to the fact that he was not an enemy of the region as some ‘liars who have nothing to offer the region’ claimed.

“Federal Government has no business with basic primary education because they are functions of the state government, but I took it upon myself to build Almajiri schools here because we realised there is a higher percentage of children out of school in the North than in the South. So we intervened massively. Is that hating the North?

“In the area of agriculture, tell me of any government that has supported the North with several agricultural equipment and with billions in cash loans. Is that hating the North? If I don’t like the North, will they benefit up to 70 per cent of agricultural reforms we are doing?” he asked.

Speaking further, Jonathan called on politicians in the state to shun violence at the forthcoming elections and exhibit the spirit of sportsmanship in politics. “…on my arrival this morning, the Sultan of Sokoto, Muhammadu Saadu Abubakar, drew my attention to the unwarranted rivalry that existed among political parties in the state and he condemned the development in its entirety.

“I visited Ogun State recently and the state Governor, Ibikunle Amusun, who is of the opposition party accommodated me at the Governor’s Lodge, where both of us passed the night without any rancour. I believe this is what politics should be,” Jonathan said.