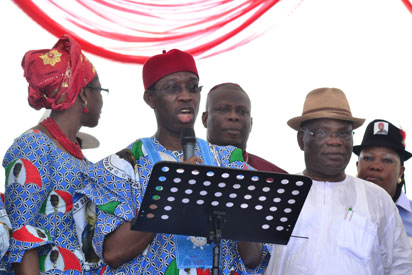 Peoples Democratic Party (PDP) faithful in Delta have been  urged to ignore the gale of defection from the party and sustain support to it and its presidential candidate, Dr Goodluck Jonathan.

Sen. Ifeanyi Okowa, the party’s governorship candidate in the general elections in the state, made the call at the commencement of his campaign at the Oghara Township Stadium in Ethiope West Local Government Area on Tuesday.

Okowa charged party members to embark on door-to-door campaign and not to allow the defectors to deceive them, adding that Jonathan was a supporter of all organs of democracy.

He said that his government would focus on purposeful and people-oriented projects that would impact positively on the lives of the people, if elected.

Okowa said he also would improve on education, health and agricultural sector.

He promised to strengthen the industrial sector in the state by completing the ongoing Warri Industrial Park and construct two additional ones.

He added that he would give greater attention to education, health and agriculture, and stressed that the government would “build bridges” across various communities, to enhance unity.

“PDD will continue to deliver the dividends of democracy to the people of Delta, restructure the education sector by encouraging vocational skills for our youths.

“We will also create health insurance scheme for the people and embark on rapid urban renewal.

“We will partner the private sector to ensure rapid industrialisation of the state”, he said.

Okowa commended people of the state for their large turnout for his inaugural electioneering, and urged them to vote PDP in all the elections.

In his speech, Mr Cairo Ojougbo, PDP National Vice Chairman, South-South, said that members who defected from the party would be sanctioned if they failed to return.

Ojougbo said that the national leadership of the party was happy with Delta.

According to him, we have strong faith in you; with over 100,000 votes, victory is certain for the party in the state.

He told the crowd that the party had strong faith and confidence in its governorship flag bearer in the state and urged the electorate to vote enmasse for the party.

He also urged them to ensure that they collected their permanent voter cards to enable them vote during elections.

Highlights of the event included the handing-over of the party flags to the governorship candidate. (NAN)