Home Politics I’ll Gladly Lay Down My Life For Nigeria, But Not For The...
Facebook
Twitter
WhatsApp 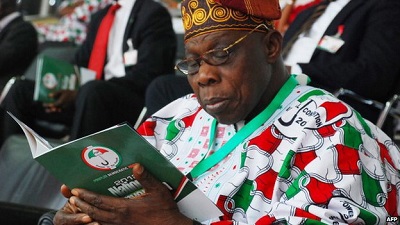 Former President Olusegun Obasanjo on Thursday was in his usual elements as he declared that he was not ready to sacrifice his life for any political party, but would prefer laying down his life for Nigeria.

Mr. Obasanjo stated this when the Presidential Candidate of the National Conscience Party, NCP, Martins Onovo, paid him a visit at his Hilltop private residence in Abeokuta.

The ex-president commended the role Gani Fawehinmi (SAN), founder of NCP, saying the late legal luminary did not only fight injustice but also checked the excesses of governments in power.

“In the interest of a better society there is always the need for some people to serve as watchdogs. Fawehinmi throughout his life devoted his intellect and energy to fight injustice, bad governance, corruption and other social vices”, he said.

“Let me pay tribute as I have done in my recent book‎ to the founder of your party, Gani Fawehinmi, I believe he was a genuine social critic though you may not agree with all that he said or how he went about them. But he was definitely a genuine social critic, so you (Martins) as the flag bearer of the party he founded, if you should follow his footsteps of integrity and genuine critical analysis and committed analysis and criticism of the situation in the country, I think nobody will fault you”, Mr. Obasanjo said to his guest.

Mr. Obasanjo said “Let me make my own position clear, I am a card carrying member of PDP (Peoples Democratic Party) because that is the party on which platform I became the president of this country”.

He further advised his guest that “If what you’re trying to do is in the best interest of Nigeria and Nigerians accept and vote for you, who I am I not to accept you as President of Nigeria, I will. But whatever may be the outcome of the election after you have done all that you can, once the election is free and fear and undisturbed, uninterrupted, then you have to accept the verdict of the people”.

Mr. Obasanjo reiterated his call on the Independent National Electoral Commission, INEC, to ensure free, fair and transparent elections that would be acceptable to Nigerians.

“It is only free, fair and transparent elections without mago, mago that would be acceptable to Nigerians”, Obasanjo affirmed.

Earlier in his remark, the NCP presidential candidate said he was at Mr. Obasanjo’s home to receive his blessing for his ambition as well as tap from his fountain of knowledge.

“We think that Nigeria needs a fundamental change and not superficial change, that’s our view and we’ve decided to come and tell you our mission in politics. What we are here to do and how we intend doing it and to seek your blessings for the efforts we are making”, he said.

“Our programme is designed to lead to the abolition of poverty, through full employment, improve health care and electricity supply which is very critical to industrial development anywhere in the world”, Mr. Martins asserted.

“We are very aware that you (Obasanjo) did very few critical things in government when you were there‎ and some of those we wish to continue when we get to office particularly the anti-corruption efforts of EFCC (Economic and Financial Crime Commission), ICPC, (Independent Corrupt Practices Commission) we intend to continue.

“We intend, when we get elected with your guidance to check the loss in the National revenue so that we can have funds to carry out the developmental programmes we have promised our people.

“We are also aware that you left about 67 billion dollars in the excess crude account and the foreign reserves and unfortunately, what we know now from the Debt Management Office is that we are indebted to 70 billion dollars, it’s unfortunate and we also think that many Nigerians are looking for fundamental change and we are hoping to build on some of your developmental initiatives you left behind if with your blessing we are able to get into office”.