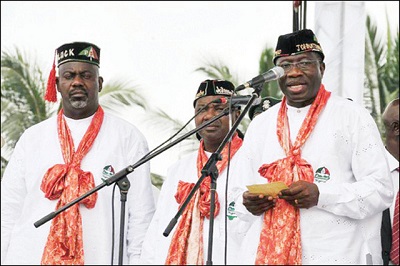 President Goodluck Jonathan has promised that if he is reelected for a second term, he would revisit the controversial issue of 76 oil wells, which the Supreme Court, three years ago, ruled as belonging to Akwa Ibom State.

He made this pledge following a public demand made by a former governor of Cross River State, Mr. Donald Duke that the issue be resolved politically.

Speaking at the Peoples Democratic Party presidential campaign in Calabar, the Cross River State capital, the president said: “Once I return to office, I will sit down with stakeholders from Cross River State and look at their demands, including the oil wells and the immediate priorities with a view to settling them”.

He also promised to consolidate on the industrial revolution ongoing in the state by constructing a new coastal rail line from Lagos to Obudu Ranch Resort and boost capacity of the Calabar Free Trade Zone (CFTZ).

President Jonathan said, if re-elected, he would use the remainder of his final term to focus on empowerment and training of Nigerian youths, which he said was the reason he completely endorsed the emergence of Professor Ben Ayade as the governorship candidate of PDP in Cross River.

Speaking earlier, Governor Liyel Imoke said that the state would deliver 1.1m votes to the president, telling Mr. Jonathan to be rest assured of winning in the state.

“The president does not need to campaign in Cross River State. Even if he doesn’t visit he can rest assured that we will still vote and deliver 1.1 million votes to him”, he said.

Governors Emmanuel Uduaghan (Delta) and Seriake Dickson (Bayelsa) also assured the president of delivering their states to him come February 14.