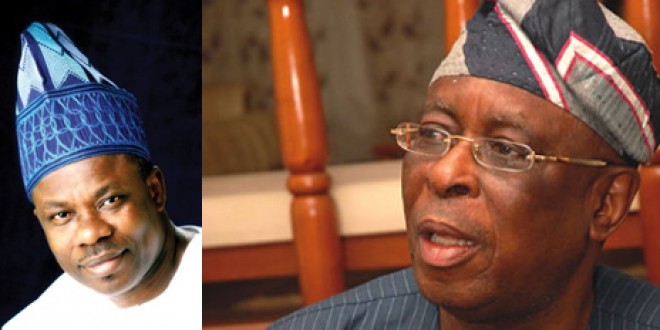 Governor Ibikunle Amosun of Ogun State on Monday said he is neither “jittery” of former governor, Olusegun Osoba nor his recent prediction that the Social Democratic Party (SDP), would garner about 500,000 votes for its governorship candidate, Senator Akin Odunsi, in the February 28 governorship poll in the state.

Amosun, who is the governorship candidate of the All Progressives Congress, APC, wondered what “magical stunt” the ex-governor wants to pull to enable SDP win half a million votes in the state when it is obvious to all that he or his party does not command such support.

Amosun said the changes that have been made in the lives and communities in the last 43 months coupled with the facelift of the cities, towns and rural environments across the state would ensure his re-election.
http://www.airmaxfreedom.com nike air max 90 infrared
Speaking through the Director of his Campaign Organization, Chief Bode Mustapha, at a press conference in Abeokuta, the state capital, Gov. Amosun said he is drawing the attention of the world to Osoba’s boast of getting 500,000 votes in the poll.

According to him, some politicians are capable of playing sundry “tricks” hence the need to raise alarm so that the election is  not rigged by anybody or political party.

He said, “What kind of mysterious, magical stunt does Chief Osoba have under his hat that will automatically produce a half – million votes out of nothing, or from clear blue skies? This is because the whole world already knows that neither he nor his party possesses the support to command even a fraction of that figure from any ward in any part of the state.

“Ideally, Chief Osoba should be patient enough to test his popularity at the polls. Here is a party that would not even garner marginal support from its campaign at the Itoku Market amongst other parts of the state capital. Perhaps there are high and mighty plans to rig these elections”.