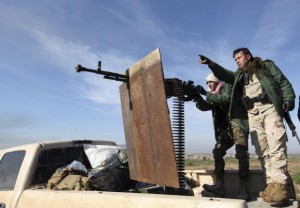 In a government building in Mosul, a few of Iraqi contractors have gathered there to compete for a tender last month. It was the kind of routine session which  happens in cities everywhere — except that the contract was for fortifications ordered by the new rulers in town, Islamic State. Reuters report:

One member of the radical Islamist group grabbed a map and explained to those present what was required.

“Under Islamic State’s tender document, a trench two meters in depth and two meters in width needs to be dug around Mosul,” said a source in the city close to the tendering process.
http://www.newbalanceshoesinc.com new balance 621
The winning contractor will be paid the equivalent of $4,000 for each kilometer of trench, the source said.

The tender demonstrates Islamic State’s determination to defend the city that it conquered in June, as the extremists grabbed a large area of territory from Baghdad. Rich in Muslim history, Mosul stands at the center of the group’s aim to carve out a modern caliphate from large parts of Syria and Iraq.